Hey beauts! I hope everyone had an amazing holiday and celebrated New Year in style. I’m currently nursing a chronic hangover lol but it was definitely a good night. 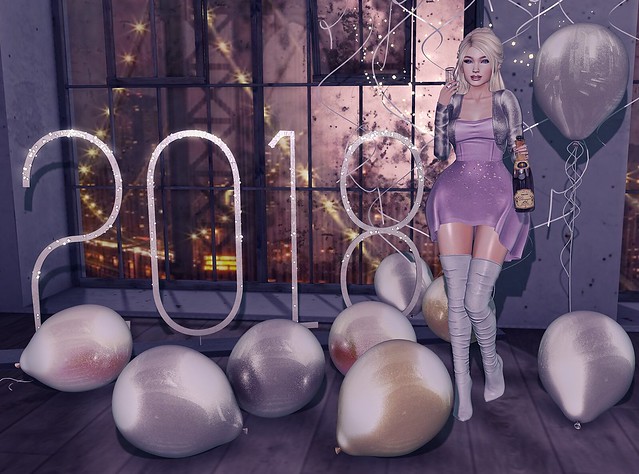 I thought I’d recap on my post from last year where I made some goals to see if I achieved any and talk about my last 12 months in Second Life.

Goal 1: Buy a new house – I did this! I’m now bored of said house and it didn’t improve my lag situation much but hey lol.

Goal 2: Give more – I think I did achieve this but maybe not how I first intended. I have definitely been generous in giving to charitable causes and such but in joining the community that I found (more about this later) I gave so much of my time and dedication for all sorts of projects and loved every second.

Goal 3: Spend less – let’s not talk about this.

Goal 4: Stay in contact with friends – I think this was achieved! I went from platform hermit to social butterfly and although sometimes it’s difficult to keep different friendship groups happy I think all is well.

Goal 5: Find new roleplay – Not so much lol but it was made up for by everything else in the past year!

Goal 6: Connect with other bloggers/vloggers – Can’t say this happened either but this is probably due to the fact I became involved with other projects and blogging was put on the back burner.

I actually took a bit of a break in January and returned around April time, just pottering about doing some shopping and hunts. One day I reconnected with my fab friend Solsty, she sent me a TP to join her at the beach and boom. From that day my whole SL was turned upside down.

It’s not often I feel instantly accepted by a community but with this one, it was almost instant. I love surfing and had surfed in SL before but I was introduced to a whole other world. Since then I’ve made sensational friends, became a photographer for SurfWatch, partied hard, got involved with huge events and even competed in my first surf comp.

It’s been a wild ride for sure and I want to thank you all for being a part of my life.

What does 2018 hold? More of the same I hope. I’m planning on competing from the start of the next surf comp season, I plan on working on the media side of things to bring interesting and unique ways for the rest of Second Life to see surfing and the amazing community that surrounds it.

And as always I’ll continue to take photos because that, accompanied by music, is my greatest escape.

One thought on “Happy New Year!”